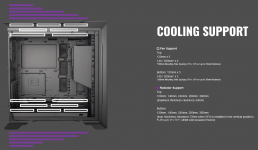 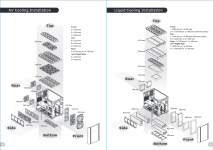 We criticized the Fractal Define S2 in the past for being basically the same case as the Define R6. The Define 7 is also very similar to the R6, but that makes much more sense for a successor, and the 7 also has some meaningful quality-of-life improvements over the R6 that are worthy of a new case. The Define 7 is up to Fractal’s usual standards of build quality, it’s quiet, it’s flexible by nature, and it doesn’t have the worst possible cooling performance, although we’d definitely recommend some aftermarket fans. $170 is a higher-than-average price for a nice PC case--we’d be more comfortable recommending it to a general audience at $150, especially given the stock cooling performance. That said, the Define 7 is a well-constructed case that’s a great platform for liquid cooled systems, and enthusiasts buying it for that purpose won’t be disappointed.
Klicke in dieses Feld, um es in vollständiger Größe anzuzeigen.

Conclusion: Mesh Can Be Better, But…​

We’ve demonstrated our hypothesis as accurate for this specific scenario, but there are a lot of things to keep in mind. First of all, silent cases still play an important role in the case market. Not everyone wants to tune fans, so that’s a major bonus, and they also may deal better with dust in many instances. Silent-focused cases can also eliminate certain types of annoying noises, something we didn’t test here. You’d need a particularly whiny system to really notice, granted. They’re also more advantaged in battles of absolute silence, whereas we were going for “operable silence.” If you want complete, total silence, you can really only get so low with a mesh case. At some point, it’s going to be limited, and the closed paneling will benefit companies like Fractal and be quiet! in those instances; that said, these cases are also limited insofar as their ability to still operate at reasonable temperatures while being so quiet. For idle or low-load operation, like in an HTPC that mostly plays YouTube videos, it makes sense. For gaming or workstation loads, too much silence will yield poor thermal results.


As for the rest, it’s clear from our testing that the right mesh case can be optimized to equivalent noise levels (“volume”) as at least some quiet cases, but with superior thermal performance and airflow. We prefer this approach for high-end enthusiast builds, but we fully appreciate why it is not the best for all use cases (see above). Our testing also demonstrated the superiority of high-end case fans, like the stock fans that be quiet! used in its Silent Base 601. Transplanting those into the RL06 posted tremendous value for both noise level and airflow.
Klicke in dieses Feld, um es in vollständiger Größe anzuzeigen. 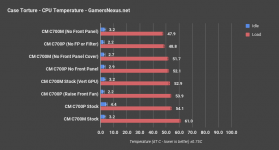