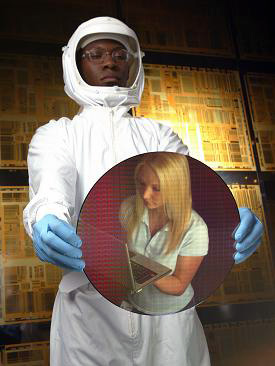 The company is headquartered in California's Silicon Valley and has operations around the world. Outside of California, the company has facilities in Argentina (Córdoba and Buenos Aires), China, Costa Rica, Malaysia, Mexico, Israel, Ireland, India, Philippines, Poland, Russia, and Vietnam internationally. In the U.S. Intel employs significant numbers of people in California, Colorado, Massachusetts, Arizona, New Mexico, Oregon, Texas, Washington, and Utah.[41] In Oregon, Intel is the state's largest private employer with over 15,000 employees, primarily in Hillsboro.[42] The company is the largest industrial employer in New Mexico while in Arizona the company has over 10,000 employees, Intel is also the largest employer in Ireland, where it has over 5,000 employees.
Klicke in dieses Feld, um es in vollständiger Größe anzuzeigen.